Welcome to the Rotary Club of Naperville – Downtown!

We are now meeting by Zoom at 4:44 pm on Wednesdays. If you would like to join us for a meeting, please email RCND2020President@gmail.com.

Rotary Club of Naperville – Downtown since 2007 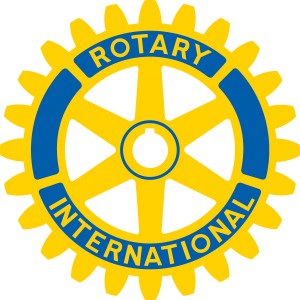 The Club meets weekly at 4:44PM on most Wednesdays.

No Meeting if there is 5th Wednesday in a month.

Typically, members start arriving at 4:30PM for fellowship and fun, take attendance at 4:44PM and begin the official meeting at 5PM where the focus is on engaging and enlightening programs, complete with Q&A.

Look for the yellow Rotary signboard in the plaza for directions to the meeting room.  All Rotarians from around the world are welcome as well as those community-minded individuals interested in the weekly educational program. The guest fee is $20 which includes delicious appetizers and assorted beverages and/or wine graciously provided by RCN/Downtown and Hugo’s. Whether a Rotarian or not, guests always are welcome to this casual small interactive club.

Meeting & Notes Schedule / 4:44 Rotarians work together to plan enlightening programs throughout the year. Members are responsible for arranging programs and contacting the Program Coordinator with ideas for the calendar.

Rotary Club of Naperville/Downtown celebrates its birthday annually in late February. Seasoned Rotarians will remember that Rotary International was chartered on Feb. 23, 1905, in Chicago. Downtown Rotarians have strived to keep the connection. At this dinner, this Rotary club recognizes its 100 percent member-investment in the Rotary Foundation and also honors a number of community members with Paul Harris Fellowships, an honor individual Rotary clubs may from time to time bestow on individuals who meet high professional and personal standards set forth by Paul Harris. Paul Harris recognition is not limited to Rotarians. (A Paul Harris Fellow receives a special certificate and a gold pin.)

Note: Founded in 1917, the Rotary Foundation is a nonprofit corporation that “supports the efforts of Rotary International to achieve world understanding and peace through international humanitarian, educational, and cultural exchange programs.” The Rotary Club of Naperville/Downtown also commemorates more than 100 years of the Rotary Foundation with tributes to the programs it has supported through life-changing service. 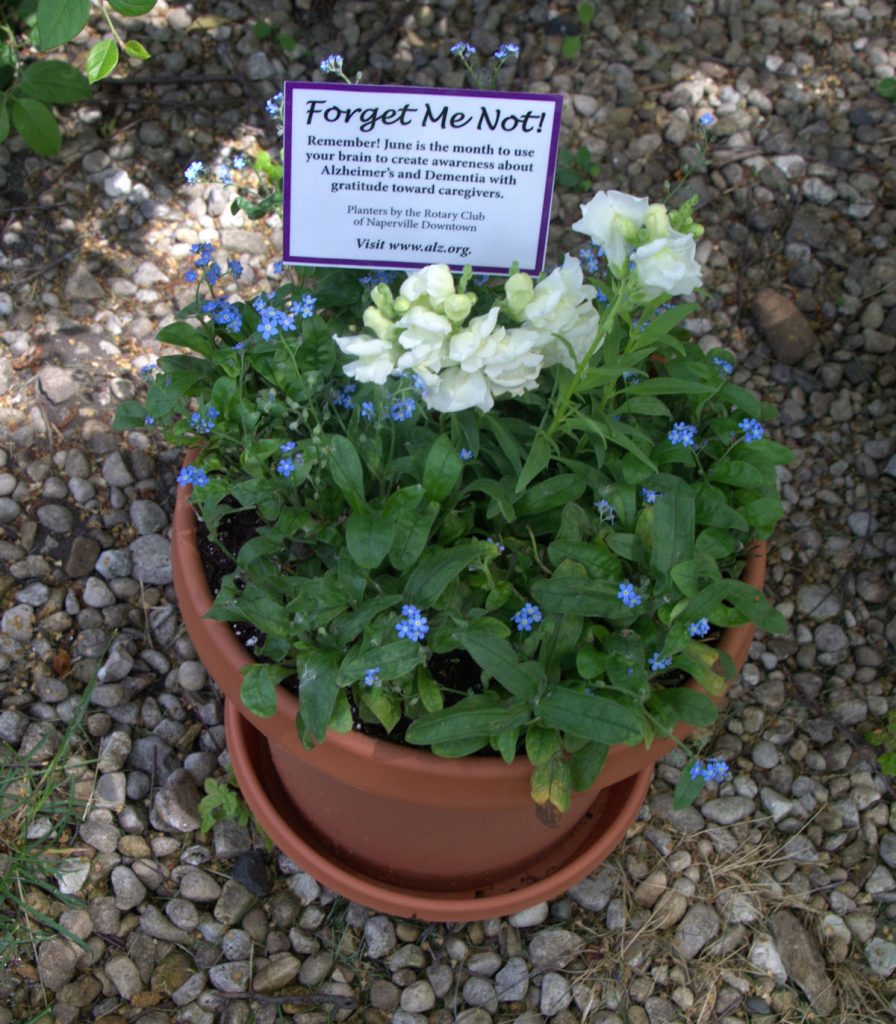 In recent years, planters of forget-me-not flowers were placed at the businesses of Rotarians to grow awareness about Alzheimer’s. Forget-me-nots are reminders that during the month of June, individuals worldwide are asked to take the Purple Pledge. Use your brains to fight Alzheimer’s Disease and Progressive Dementia!

For information about a Rotary initiative highlighted in the April 2015 Rotarian Magazine titled “Slow Fade, New Hope in the Fight to Stop Alzheimer’s,” click here.

Now designated to become an annual service project, look for the planters mostly at local independent businesses with a few in front of homes of Rotarians. In addition to raising awareness about Alzheimer’s and Dementia, the Rotary Downtown initiative provides an opportunity to express gratitude to helpful caregivers and compassionate hospice volunteers.

Every planter includes a small sign on a stick that reads, “Forget met not! Remember June is the month to use your brain to create awareness about Alzheimer’s and Dementia with gratitude toward caregivers. Visit www.alz.org.”

Scholarships by Rotary Club of Naperville/Downtown

The Rotary Club of Naperville/Downtown collaborates with the College of DuPage and Waubonsee Community College to provide annual scholarships for qualifying single parents who return to school to complete their education. These dedicated scholarship recipients have displayed significant efforts to better their community in the spirit of Rotary service. Since 2008, Club members have supported these scholarships via their dues/giving fund and award them to deserving students with assistance from the colleges to identify need. Outside support from family and friends for these scholarships also is appreciated. Donations may be mailed to: 4:44 Scholarship Fund, Rotary Club of Naperville/Downtown, P.O. Box 5336, Naperville, IL 60567. 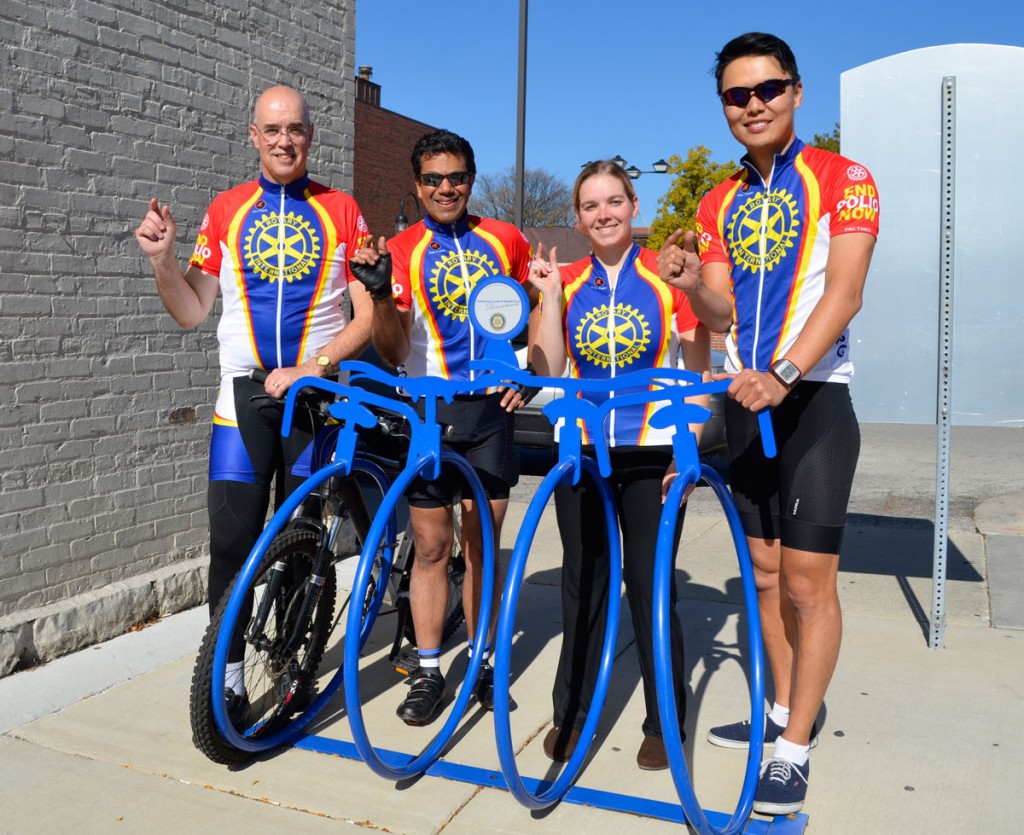 The Rotary Club of Naperville/Downtown hosts one annual fundraiser, Rotary Ride, in memory of Carmen DiGiovani. Thanks to all cyclists and sponsors that have participated in Rotary Ride since its beginning when it was first imagined by the Rotary Club of Naperville Sunrise, where DiGiovani was a founding member. Registration soon will be in progress for 2020 Rotary Ride. Click here to more info coming soon about the bike ride slated for Sun., Aug. 9, 2020. Currently, the link is a showcase of photos and updates. Beneficiaries again will be Rotary International End Polio Now as well as three local nonprofit organizations, Naperville Responds for Veterans, Loaves & Fishes Community Services and 360 Youth Services.

Other community service grants, recommended by club members, are supported by the club’s semi-annual giving program. Membership also is 100 percent vested the Every Rotarian Every Year initiative, a program that asks every Rotarian to support The Rotary Foundation.

For  a little history with the club’s focus on bicycling, (Click here for Naperville Rotary Ride photos from 2015.) the Rotary International Team under the leadership of RI General Secretary John Hewko has participated in Miles to End Polio as part of El Tour de Tucson. Click here to help End Polio Now. Thank you.

Rotary International, a service organization founded 1905, is comprised of 32,000 clubs in 200 countries. More than 1.2 million individuals have come together to become Rotarians by joining one of the clubs aimed at making positive and lasting changes in their communities and beyond.

Members of RCN/Downtown and all Rotary Clubs always are welcomed to visit any Rotary Club in Illinois, the United States or the world where they’ll receive a friendly “hello.” Visiting other Rotary Clubs is a great way to learn about Rotary projects and fundraisers that can make a difference for unmet needs as well as to experience first hand what’s happening in other communities. Rotary Clubs meet weekly to build friendships, goodwill and peace worldwide with a motto of “Service above Self.” Guest fees vary from club to club. The guest fee for Rotary 4:44 is $20. To learn more about Rotary, visit Rotary International.

Rotary Club of Naperville / Downtown President Kevin McQuillan reminds readers to be inspired and to learn more about the 63 clubs in Rotary District 6450, the birthplace of Rotary, with a visit to www.rotarydistrict6450.org.

Members of RCN/Downtown are actively engaged in many community and service initiatives to augment Rotary’s motto, “Service Above Self.”

When RCN/Downtown members identify charitable causes for their grants, they qualify the cause by asking, “Will the grant make a difference and will it fulfill an unmet need?” In the broad spirit of all Rotary Clubs around the world, RCN/Downtown has its own personality with a focus on local youth, healthcare, education, college scholarships and the arts.

Find the Rotary Club of Naperville/Downtown with more photos on Facebook, too.